The End OF The Libertines

Been away for a while - busy with the day job.

The NME are reporting a rumour that Pete may not rejoin the Libertines as he needs to "break the cycle of destruction" that resulted in his admission to the Priory earlier this month.

I hope it's not true, but you know we should of seen this coming with te recent solo and colaborative singels Pete has put out. Solo singles are usualy the sign that things are not working within the band.

BAck soon with a review of last nights Jetplane landing gig. Have a good bank holiday weekend! 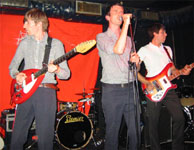 Tonight is the playlouder singles night, a monthly adventure into new bands at the Barfly. Our new heroes, The Rakes are first on early, so whilst most of London is

having a quick drink after work in the sun, we’re in the sub tropical Barfly – last time the inside of the venue saw sunlight – 1908. 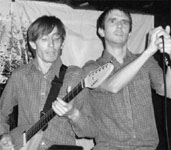 The Rakes rattle through a cracking set throwing in 22 Grand Job and its B-Side, Something Clicked And I Fell Off The Edge, somewhere mid set. As last time we saw them they look really nervous, we suspect that this band lives on their nerves – guitarist Matthew looks tense throughout the set and its this tenseness that fuels the songs – this and the thundering drums.

They finish the set with possible next single Can’t Get Laid Until I Get Paid.

The second band on are Pure Reason Revolution, who are signed to Alan McGee’s Poptones label. The first thing you notice about PRR is the hair – they have lots of it and its asymmetric. If the charts were based on hair cuts then PRR would be right up there with fellow Reading noise merchants The Cooper Temple Clause.

The songs are long. Very long (I think they manage to get 5 into the 45 minute set) but entertaining with lots of Beech Boys style harmonies – 4 voices in total – and multi instrumentalists. The eclectic style of the music, with shifting time signatures and keyboard squelches is reminiscent of The Beta Band or The Orb. Actually for an old Floyd fan like me these guys are quite exciting and definitely work investigating further.

Forgot to mention that Bloc Party are playing a secret gig at The Barfly this Friday. I can't make it 'cos I'm going to see another band, but it should be a great night.
- posted by Nigella @ 9:26 PM (0) comments

Just back from seeing The Rakes play another fantastic gig at the barfly. Met the guys from Trash Asthetic's, who put out the bands first 7" single. They persuaded me to buy another copy - which I did. I may put it on ebay to see if I can make a couple of quid.

XFM are reporting at Pete Libertine has gone into rehab at London's Priory clinic. Muso-bable would like to wish Pete a speedy recovery and a smack free future.
- posted by Nigella @ 6:26 PM (0) comments
Monday, May 17, 2004

The Walkman add another London Date

The Walkman, will be playing ULU on 24 June - tickets available here. I'm annoyed that I missed their gig a couple of weeks ago at The Garage and I'll miss this as well as we will be down on Pilton Farm. Hopefully, they'll put in an appearance at the festival.
- posted by Nigella @ 9:48 PM (0) comments

It is with great regret that I have to report our first mediocre gig of the year – it’s not that either of tonight’s bands are bad, it’s just that they’re not so great either.

Our copy of the NME says that tonight’s support bands are 10,000 Things and Victor Malloy. Unfortunately, we only et one support band and they don’t tell us their name. Maybe they are Lucky Jim, who have been on tour with Joy Zipper over the three other dates of the UK tour. It doesn’t really matter anyway – its probably enough to say that they are from Leeds with a singer who dances like Shane McGowen and sings with an American accent. In between songs the singer, who goes by the name of Sam, blathers on to the crowd in a broad Leeds accent trying to get us to talk to him - everyone looks on bemused.

And so on to Joy Zipper, who are actually from America – we get full American schmaltz from singer/keyboard player Tabitha Tindale when she comes on stage - “Hi there, how are y’all doing tonight”.

The songs sit somewhere between Sonic Youth, Grandaddy and Spirtualized, with tracks lifted from the current album America Whip and the last album The Stereo And God. The most entertaining thing about tonight is the heckler who attempts to have a conversation with the band after every song. Unfortunately, being nice people and not being from these parts, they answer him early on in the gig and that’s it – the pattern is set for the rest of the evening – he request’s songs; he tries to impress Tabitha with his knowledge of their early singles. This over interaction with the crowd ends with a disastrous sing along where the mic is passed to members of the audience to sing the refrain.

The only other high point is when Vincet Cafiso Jokes about splitting up Joy Zipper and forming a metal band. Hearing this joke the drummer brakes into the opening of Rock And Roll by Led Zeppelin and we wish he would continue.
- posted by Nigella @ 8:12 PM (0) comments
Wednesday, May 12, 2004

The Cancelled Zutons gig has been rearranged for Tuesday 22nd June, which is not great as it’s the night before we head down to Summerset for Glasters. They’ve also added a gig at The Shepard’s Bush Empire in October.

There’s a great piece in today’s print edition of the NME (god knows how you find these articles on the web site) about the rise of the Art Rock scene in New Cross (that’s in SE London for our international readers). It suggests that Lewisham will be christened The Rock Borough because of its small-band-supporting-club Pop Of The Tops; its fledgling record label Angular Records; and the leaders of the scene Art Brut and Bloc Party.

And since I’ve mentioned Bloc Party, can I just plug there excellent new single, Banquet, which I overlooked whilst gushing about The Rakes. This is a step up from their debut – think of it as a proper pop record, the bigger brother of The YYY’s Rich, with a four-to-the-floor baseline and a stop start chorus. IF you can get hold of a copy I strongly suggest you do – I believe Amazon have a few left.

What do The Rakes and Bloc Party have in common? Glad you asked - their debut singles were both released by Trash Aesthetic, which is fast becoming the label of choice for new bands.

Yes! I managed to get my hands on a copy of this soon to be legendry debut single from the lovely fellas at Rough Trade, who were limiting people to 2 copies each. I suppose I should have got a second copy to sell on EBay, but I was overcome with joy at getting my hands on this piece of vinyl.

So what does it sound like? Well it manages to pack a lot into something around 100 seconds – it starts with a run through the chorus, before the guitar pattern that anchors the song kicks in. The lyrics have the same distorted feel as every record ever recorded by Billy Childish (maybe they record their songs in the same broom cupboard) and tackle the banality of office life – bird at work looks alright, but the bloke in Sales likes her too, he’s on 28 and you’re only on 22; the lights that are too bright; talking shop with your colleagues in the pub after work, did you do the same degree?

As well as these lyrics, the song manages to squeeze a hand clap break down into the middle and a key change in at the end. Up ‘til now I’ve viewed the key change as an evil invention used to give a song further legs, used when the band can’t think of anything better to do. Exhibit A in the case against, Robbie Williams, Rock DJ. The exception that proves the rule is every record released by Motown, where the key change adds to the excitement (think about Chain Reaction by Diana Ross, which has about 3 key changes). This song fits the later, the key change ups the tension – you can hardly accuse The Rakes of trying to extending a sub 2 minute song.

If you’re interested the band are playing at The Camden Barfly on 18th May.

Tonights Zutons gig was cancelled :-( I received a phonecall from see ticket at lunch time to inform me it was off - apparently the drummer, Sean Payne, dropped a flightcase on his hand.

Bit of a disappointment but probably more disappointing (and painful) for The Zutons. Lets hope Sean's well enough to play Glastonbury.
- posted by Nigella @ 11:05 PM
Thursday, May 06, 2004

I took a diversion on the way home to pop into Rough Trade to pick up a copy of The Rakes single, but they haven't had any copies in - but apparently they will have some in tomorrow - so I'll be popping in on my way to The Zutons gig.

What they did have in was the new Bloc Party single - so it appears to be out this week rather than next week (as I incorrectly mentioned earlier this week) and the new Joy Zipper and Ash singles, all on lovely 7" vinyl.

On my way home I passed The Astoria and was offered a ticket for Franz Ferdinand (who are playing tonight, probably as I type) for the bargin price of 30 quid. I was almost tempted to part with cash but I figured that 30 notes would probably get tickets for both Annie and I to see them later in the year - besides I suspect they will be playing at Glasters, which is only about 7 weeks away.

Ash
Since I've mentioned Ash, I would like to plug their official website, which has been relaunched and has some great "in the studio" and live photos in the gallery.
- posted by Nigella @ 8:39 PM
Tuesday, May 04, 2004

Some great singles being released at the moment. Last week The Streets released You're Fit And You Know It, which is a work of genius and has been rewarded with the number 4 spot in the hit parade.

This week, The Rakes release their debut single, 22 grand job. Go and buy it now, or order it from Rough Trade and wait for the postman to bring it to you. Apparently ther are only 500 of the little buggers out there so I'm going to have to dash over to Neal's Yard to get a copy tomorrow.

Next week is the new single from Bloc Party, which will be rocking my turntable shortly after the 10th.
- posted by Nigella @ 9:21 PM