Some More Photos
Three of the reasonable shots I managed to get at last week's Arctic Monkeys gig. 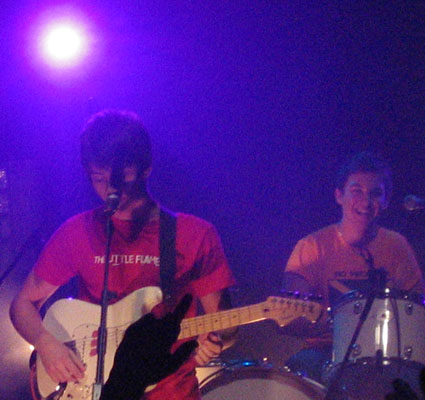 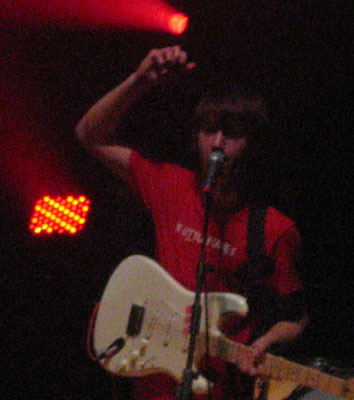 Arctic Monkeys, The Astoria
Not much to say really, they were awesome. During the first couple of songs, including soon to be number 1 single, I Bet You Look Good On The Dancefloor, the entire downstairs of The Astoria turns into a mosh pit. I don’t think I’ve seen anything like it since the first time The Libertines played the Astoria as part of the NME Brat tour.

The Arctics actually seem to be awestruck by playing such a large venue in London. Alex makes several references to not having ventured to London this time last year and how many of us there seem to be. It doesn’t seem to bother them – they play with the same level of confidence and with the same swagger they had a couple of months ago at King Tuts. Of course this time next year it’ll be 3 nights at Brixton or Ally Pally.

One thing I will mention is gig-karma. You know how it goes, you get someone who stands in front of you; they piss you off buy talking through the support band; they keep pushing you back etc etc etc; Well we had a guy like this standing in front of us. He got our backs up by standing directly in front of Annie, 6’2 in front of 5’9, when there was plenty of space in the venue and then turning to us and telling us “If you want play with the players, you’ve got to be a player”. I’ll send a prize to anyone who can tell me what that means. Anyway, to get to the point he said something to a rather sweaty drunk guy as he made his way back from the front of the gig. This guy reacted, words were said and our player took a couple of punches. Proof that gig-karma works.

Actually, it was one of those gigs where everyone has a short temper. It was crowded and hot (people in big coats despite the mild Indian summer conditions outside) and people were hyped up. I caught an angry exchange between songs between a guy standing behind the sound desk and one of the sound engineers. Now you don’t often see that.

Support was from a band called Millburn, who are cut from the same cloth as the Arctics.
- posted by Nigella @ 7:15 PM (0) comments

PRR are, as always, great. The set is pretty much the same set they been playing for the last year or so, and so it is as you would expect tight. This is their first show “with visuals”, so that’s one step closer to Pink Floyd.

Since the last time we say them PRR have been attracting proper prog fans. They’re easy to spot – bald of head and round of waistline they contrast the asymmetric haircuts of the arty crowd.

Support is from a band called Red Jetson, who are a bit proggy and just a little bit dull. They have a singer who reminds me of a guy called Jeremy I used to go to school with. That won’t mean much to you, so I’ll describe him as Brian Ferry without the charisma or sex appeal.
- posted by Nigella @ 6:52 PM (0) comments
Monday, October 03, 2005

Photos
I've been taking quite a lot of photos recently and I'm going to try and create a photos page. Until I do that here are a couple of photos of Battle from last week's gig at the 100 club. 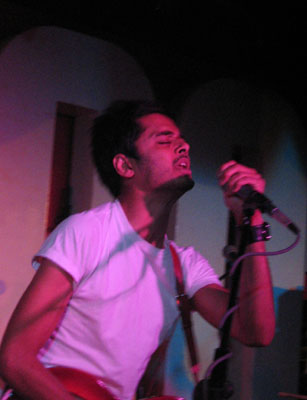 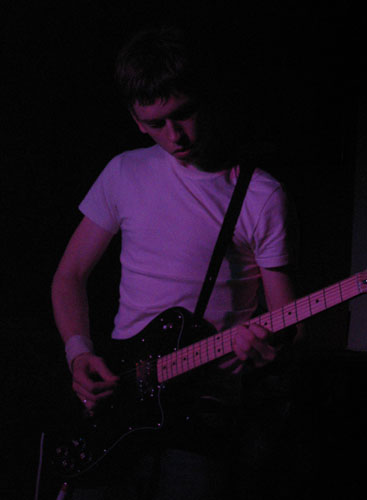 iliketrains/Stuffy And The Fuses/Battle, 100 Club
A quick review. As always Battle played a good set, despite looking knackered (this is the last night of the UK tour). We managed to pick up a copy of their new single, Demons, which is on a 3 inch CD single - something I haven’t seen for about 10 years. Anyway it’s one of our favorites from the live set so I’m glad it’s got a release, but I’m a little concerned that there doesn’t appear to have been any promotion around the single – I had no idea that it was available, and has been available for a couple of weeks. It sounds like the sweet spot between Bloc Party and Babyshambles and sounds like a Lightning Seeds single (I can’t remember the name at the moment).

Support is from iliketrains (sic) and Stuffy And The Fuses. iliketrains are interesting, a little different from most of the other bands around at the moment. The most obvious comparison is Mogwai or maybe Godspeed You Black Emperor!, lots of layered guitars, building crescendos and slide shows of trains. Oh, and they all wear old BR blazers. We're going to keep an eye out for them and hopefully will get a chance to see them again soon.

So that’s a pretty big points deficit and one that SATF don’t overcome with their songs. Part way through their set, just after another unconvincing Blur pastiche, I look around to see Graham Coxon inspecting the fret work of Jen Fuse (the guitarist), probably wondering how she got her hands on his cast offs. He seemed to be impressed with the band, politely applauding each song, which either means he is pining for Parklife era Blur again or that SATF are signed to his Transcopic record label. I suspect it’s the latter as he disappears before Battle take to the stage.
- posted by Nigella @ 6:32 PM (0) comments