Beth Orton - Spitz
I was going to do one big monster update about all of the gigs we've been to in the last 6 or seven weeks, but it's probably better to do these one at a time or they'll not get done.

So, first up, Beth Orton at Spitz.

This is the first time I’ve been to Spitz, but not the first time I’ve seen Beth. In fact over the years I’ve seen her more than any other artist. Tonight’s gig is one of three intimate shows to promo her forthcoming album and the set is about half and half old and new. The new stuff sounds good, folkier and more accomplished than some of her previous records. For what is in affect a fan club gig (it sold out in minutes) there are a lot of people in the venue who’ve only turned up to hear the old songs - there is a huge argument between two sections of the audience on whether Beth should play Feel To Believe or Pass In Time. In the end she plays both. What this means of course is that people get a bit bored and start to talk during the new songs. About 2/3 of the way through the set Beth snaps and tells people to “stop fucking talking – I can’t do this if you don’t shut up” – which does the job.

Over all not a classic Beth gig (the shows at the Islington Chapel), but a good performance and signs that she is more confident – she doesn’t shake in the way she used to when she had to sing the first song acapella because of her nerves. It’s certainly not as bad as a gig we saw her play at the Electric Ballroom a few years ago when a faulty guitar kept cutting out on her. 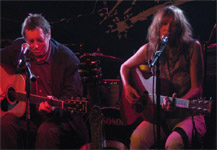 Our Dave Grohl Story
Last Saturday we popped down to our local Sainsbury Local on Holloway Rd for a few bits for dinner. The first sign something was a foot was a tour bus parked in the bus lane outside the shop. Interesting we thought....

Inside there were a couple of American rockers walking around in T-shirts and leather jeans talking to the locals, example conversation: hey, my names Kurt (maybe not the right name). Is this GOOD Cheese? Right, cool - where do I find the crackers?
Well it was all too much for us and I egged Annie into approaching them, here is roughly how the conversation went:

Annie: Hi, can I just ask which band you''s are with ?
Rocker: Hi there. I'm with a couple of bands, The Foo Fighters and The Queens of the Stone Age.
A: Really! [jaw its floor]
Rokcer: Yeah, Dave Grohl is on the bus but he's just flown in to the country and is asleep now.
A: Ahhh, that's a shame
R: Yeah, Dave's having a baby and things are tough right now. We're heading up to Birmingham for a show tomorrow
A: I was at The Astoria gig...
R: Yeah, that was an awesome show! Anyway it was nice to meet you.

And with that he disappeared onto the bus and it sped away. Was Dave really on the bus? Had we really seen his cheese and crackers? I checked the NME and the Foo's were playing Birmingham the next day.

And now for my Dave Grohl Joke
Question: What does Dave Grohl do when he's got a hangover?
Answer: He takes "a little bit of Resolve"

Richard Aschcroft or Robbie Williams ?
Have you heard the new Richard Ashcroft single Break The Night With Colour? I've heard it a couple of times now and every time I think it's Robbie Williams.

Can it be the man who wrote The Drugs Don't Work and Neon Wilderness has been reduced to this? He's supporting Coldplay this Friday so we'll find out.
- posted by Nigella @ 9:42 PM (1) comments
Monday, December 05, 2005

NME Shows announced
The NME has details of this February's shows, which always showcase the best new bands. I think we'll be going to see Editors (22/2), who were great supporting Franz Ferdinand last week, and Magic Numbers/The Concretes (16/2).